2006 – Colette Hosmer
Li Wen’s “contact” met us outside the gate of the Pig Factory. He said something to the guard, which I later learned was, “This woman is going to buy a lot of meat.” The guard waved us through.

We walked around the side of a very large, white tile building to a place where pigs were being herded through a small pig door to an interior holding pen. A pig is lying on the floor, loose in the room — back against the wall. Outside, some men are moving a pig on a flat dolly…A second dolly appears next to me and I jump aside as the pig thrashes about and falls off. Two men drag the ill-fated animal by its ears and deposit it nearer the pen. It doesn’t take long to figure out that these few unfortunate pigs have broken a leg in transport or unloading. All three are now silent, so I encourage myself to believe that they are in shock and can’t feel pain. I begin to film but am quickly told that it is not allowed. I put my camera away and retrieve the paper and pen that I brought along as a backup. 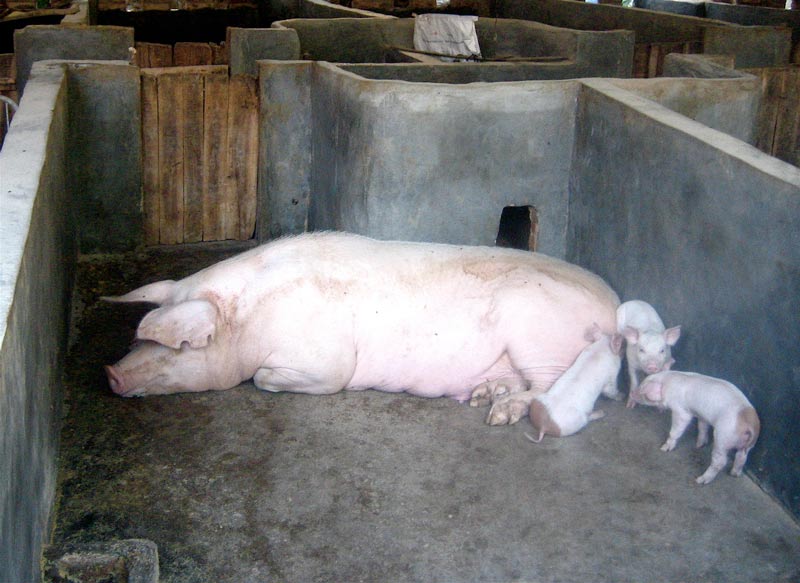 As I prepare for the bloodletting to begin, I survey the machinery. Everything looks washed and clean. There is no unpleasant odor. A conveyor belt with big metal hooks snakes along the ceiling. Its first stop is over a large square pool of steaming water that looks to be just at the boiling point. A round metal machine is perched above water level and separates the hot tank from a cold emersion tank.

Workers began to gather around, most wear rubber boots and aprons, some hold knives. My attention returns to the pen where a pig is being lifted up and out by a cable attached to one hind leg. It is pulled up to the conveyor and moved down the line a short distance. Suddenly, a man steps forward and makes a short, vertical slit in the pig’s throat. The blood gushes out and spills into a grated floor drain that runs the length of the sizable room.

Li Wen said that 1600 pigs are killed in this factory each day. There is also a second pig processing plant of equal size on the mainland, right across the bridge from Xiamen,. The pigs, 5-6 months old, come from large pig farms. I say, “they look too large to be so young.”

Now there are six pigs hanging in a row. The first few pigs in line are quiet, some of the others are still struggling. I notice that one of the men inside the pen is holding a device with a cord attached to it. I watch as one worker flips a pig on it’s side – the animal falls limp instantly as the other man presses the oversized 50’s telephone receiver to it’s neck. Another man slips a loop around a hind foot – motors hum, and the pig begins to rise.

I hear a loud splash and turn to see water slosh out of the boiling pool – then another splash and another – five pigs bob and steam in the tank. As the conveyor moves the pigs along, each hook is tripped at a certain point above the tank and the pig falls. When the first pig is sufficiently scalded, it is guided to a horizontal conveyor belt and moved up, out of the water, to the barrel shaped machine. I am startled when the contraption starts up with a roar and tumbles the pig around inside. Wet clumps of hair fly in all directions.

A pink, glossy animal emerges abruptly from the spinning container and slides into the cold-water tank. Just as quickly, a man is there with a flat bar, hook on each end. The hooks are inserted, one at each hock, and as additional slick bodies slip into the pool, the first pig rises and sways as it moves down the conveyor to another line of waiting workers.

I hear a loud thud. Over by the killing place a pig is lying on its side in the blood, legs thrashing. It must have dropped from its’ cable. Mercifully, it appears to die in moments – stained bright red. Someone walks over to hose it off.

At the next station, the glistening pigs are slit from mid-belly to the initial throat cut. Entrails appear down the line and I move to a better position to witness the next step, when without warning, the tall skinny gate guard with bad teeth, bursts into the room – gesturing and talking wildly.

“You did not get agreement from factory boss! We don’t know what you are doing! This is secret! You must go!”

As Li Wen translates the guard’s loud ranting to me, he offers a speculation of his own, “Also we might want to make his pig factory.”

As unlikely as it sounds, this is probably the manager’s biggest concern. Here is an obvious foreigner in his factory without his knowledge, attempting to photograph and take notes. He probably thought I was an investor looking to build a pig factory in Xiamen – getting a good look at the competition and stealing his secrets in the bargain.

As we are being escorted back to the entrance by the still irate guard, I think to myself, “You damned idiot. You’ve gone too far this time.” I imagine having to answer some questions from the authorities, or at the very least, the factory manager. I feel considerable relief as we reach the gate and are allowed to keep on walking.

Li Wen and I have lunch and discuss our great escape, and his next assignment. I want to go to a big pig farm and film a pig giving birth. I think there is little chance of being able to schedule such a thing, but he says, “This is easy, they know when it’s going to happen. They will call me day before.”