2006 – Colette Hosmer
I detour to meet the old man who is rushing to head me off – scuffing his shoes on the granite path with each short step. His white chin whiskers are sparse enough to count, and he appears bowed under the weight of his layered jackets. We exchange a smile as he shows me his begging bowl – the bottom of which is covered with coins and ½ yuan notes, and I suspect his good fortune is owed to this beautiful day. 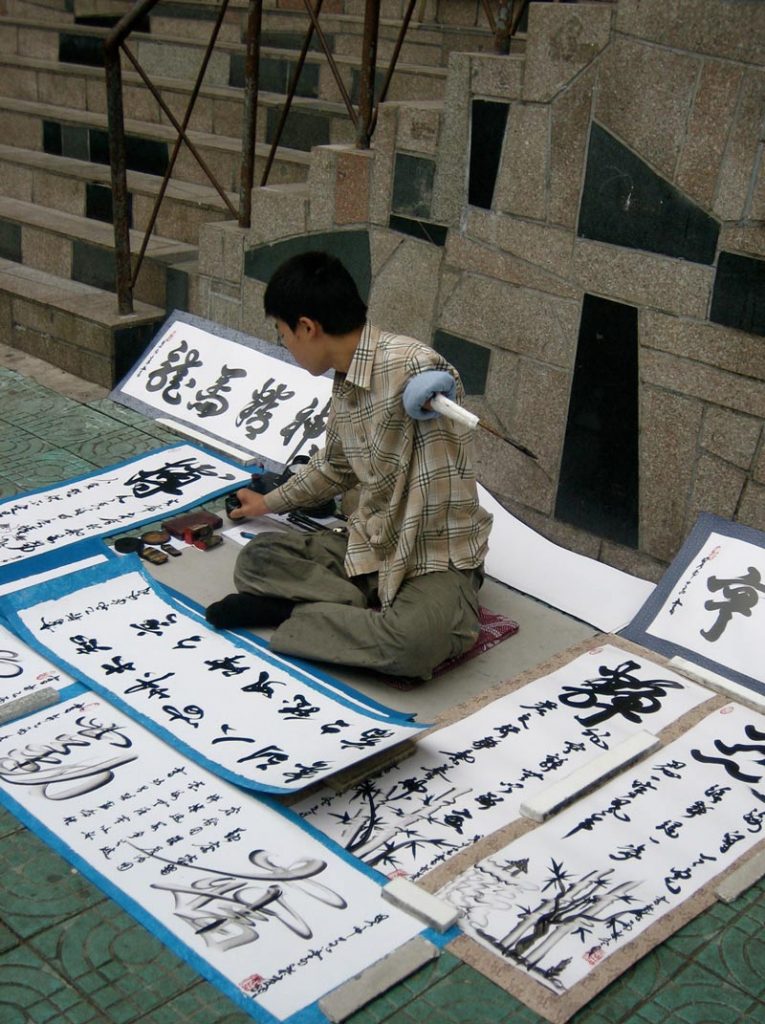 After a week of cold and rain, the sun has made a comeback – kites are flying, fishermen are catching fish, and today, those hulking ceramic pipes, that unashamedly channel their odiferous liquid to the sea, barely rate a derogatory glance. It is low tide and the clam diggers are out, levering their long-handled shovels, making big sandy piles where eighteen vertical feet of sea stood just six hours before.

This perfect weather tells me that the beach park will be crowded today. A typically large number of non-casually dressed people will come to the seashore. They will meander along the beach or sit on protective sheets of newspaper – men in suits, white shirts and dress shoes – women in fake fur-collared jackets and high-heeled boots, who will leave their little, exclamation point footprints in the sand.

The locals in semi-tropical, south China, consider winter weather – which hovers around 60 degrees Fahrenheit – to be life threatening. Close fitting long underwear, worn by every man, woman and child, is a first defense against the bitter cold. I attended a meeting upon arriving in Xiamen, in which the keynote speaker was smartly attired in suit, tie and long underwear – the sleeve of which, poked out from beneath a starched white cuff.

The morning began to heat up, so a friend and I sought out the shady side of the street as we strolled to the market. He commented on the summery weather and to punctuate the point, pulled up his shirtsleeve and jacket sleeve to show me his bare forearm. “See”, he said emphatically, “My pajamas stay home today.”

Near the row of pork vendors, a middle-aged man in a blue Mao-era jacket, sits spread-eagle on the meat-flecked floor. One pant leg is rolled to his groin, revealing scars from an injury that mangled his thigh and apparently cut short his working life. It occurs to me that begging attire lacks a foundation of long underwear. Comfort is not the look they’re after.

My attention returns to my pajama-less friend, who is saying something about the warm weather and a cold I suffered recently.

“You get sick because you like to take your clothes off”, he announced.

“In the afternoon when it gets warm”, he said earnestly, “You think, ‘It’s warm, I will take my clothes off.’ “Don’t take some clothes off”, he cautioned, “because then you will become sick.”

We pass by an impossibly thin girl – her even thinner legs are twisted beneath her on the wet concrete. I continue to the far end of the market lane and moments later, turn to find her at my feet with outstretched bowl.

I am reminded of a recent television spot, showing a smiling, well-groomed man in a wheelchair, using a public phone that had been lowered from standing height. The city of Xiamen ran the promotional ad, in conjunction with a weeklong Beijing symposium held to celebrated the 10th anniversary of the “Promulgation of the law on the protection of handicapped people”. The Xiamen ad proclaimed, “We will work to make the city more accessible to its handicapped citizens.”

The regulars who work the larger university shopping area are becoming familiar fixtures. There’s the thickset woman who displays her elephantiasis foot on a comparatively tiny square of cloth – right next to her battered begging bowl. I am fond of the sweet-faced young man with shockingly dwindled legs, one of which he slings over a shoulder so you’re sure not to miss it. I also like the man with clear, intelligent eyes (and I suspect a sense of humor) who otherwise looks like the live-chicken-eating-cannibal in the county fair I frequented as a kid. They all dwell at street level, therefore looking even more pathetic and downtrodden – except for the upright ‘cannibal’, who’s ensemble of filthy rags and wild, unwashed persona, says ‘wretched’ in any position.

These are not fair-weather beggars – I have seen them at their posts, hunched up against the cold and damp – and it pleases me to think of them enjoying a balmy winters day.

Thoughts come to me unsolicited, and I wonder, “How do these people get to their begging locations?” And, “Where do they go to the bathroom?”

These ruminations evoke memories of the first time I came to China. I was invited to participate in an international sculpture symposium outside of Tianjin. My home for six weeks was the Golden Sail Hotel. It had everything I needed – a bowling alley, Karaoke bar, revolving carpets in each elevator that correctly announced the day of the week, and a Japanese restaurant, “…located to second floor,” where I was invited to, “Come and taste the delicious odor to your own pleasure.”

The lobby of the Golden Sail Hotel offered a small, but beautiful restroom, equipped with lotion, hand towels and – a steep step up from the rest of the room – a row of three, equally narrow stalls. The door of the furthest compartment displayed an impressive brass plaque, on which Chinese characters were inscribed, and above those, printed in English, was the word, “DEFORMED”.