Notes From The Marathon Man

2006 – Colette Hosmer
A red inflated arch spans the walking path that runs alongside the beach park near my apartment. Huge speakers blast march music.  An announcer shouts into a microphone as each sweat-drenched runner, numbered squares of cloth pinned to athletic shirts, crosses under the red-arch.  Beyond the finish line, contestants cool down –walk in circles, slightly bent with hands on hips.  I see a man lying on his back in the grass –his arms and bare feet stick out from beneath a Robin-egg blue, rectangular sheet of plastic.  It takes just seconds to realize that he is dead.  A small clump of medical people (two women in pink nurse uniforms and four men in white lab coats) who are there to help promote the “Run for Your Health Happiness” event, stand at a distance from the body.  Nearby, another pink nurse continues to take blood pressure readings at a folding table stacked with brochures. 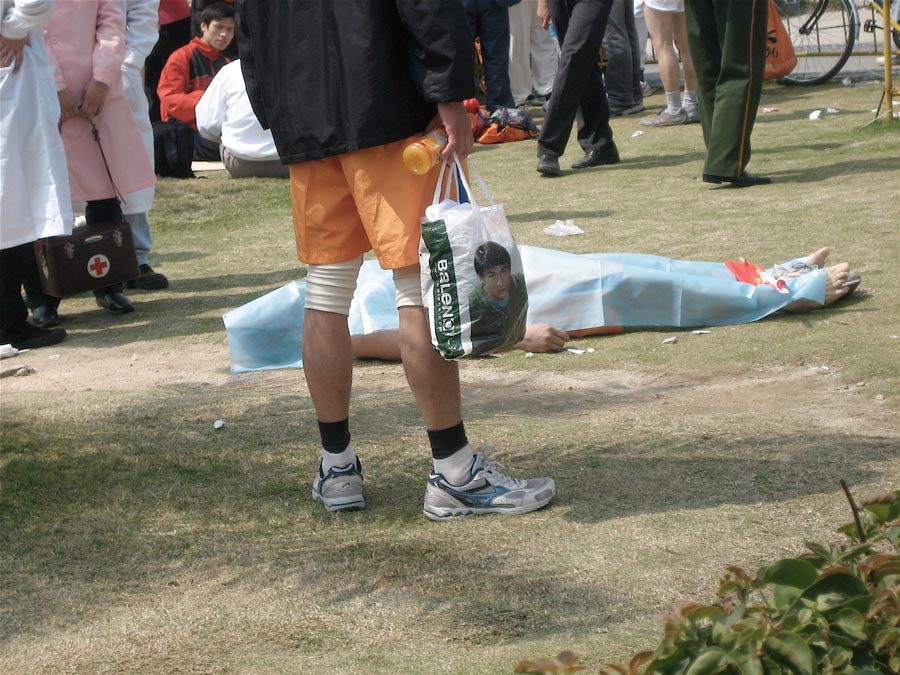 Stragglers continue to cross the finish line as the dead man lies on the grass a few feet away.  Music blares, T- shirt and flag sellers hawk their wares, people mill about in the park – cross back and forth. Friends and family wait at the finish line to greet runners with congratulations, bottled water, back rubs. The dead marathon man lies alone. The weekend park visitors continue doing what they came here to do.  An old, ragged couple collects discarded water bottles and boxed drink containers, a few of which lie very close to the dead marathon man.  I watch the couple’s expressionless faces as they gather near the body.

A small, red flag balances atop the dead man’s ankles and a red plastic bag leans against his right leg.  He lies flat on his back, face up, arms at his side, legs straight and together.  I saw him clearly when a gust of wind lifted the plastic sheet. Forty-something. Fit looking.

The ultimate irony.  A man dies while participating in a race advertised as promoting health – with medical staff all around, an ambulance parked nearby, door wide open, seemingly ready for any emergency.  Technologically advanced medical equipment displayed on folding tables, and in the center of all of this – a dead body, clothed in running attire, number pinned to chest.  Life gone.  The absolute in negative advertising.

I choke up.  I come from a culture where you wait to look at death until it’s dressed in its best clothes and wears make-up.  But here in China death comes unadorned.

Finally, someone switches off the generator and the red arch collapses.  Another man begins to gather up colorful flags that were posted along the finish line.  The clump of pink uniforms and white coats sit under a squat palm, not far from the dead man.   Someone important-looking shows up – the medical staff stands up.  A pink nurse tucks the corners of the blue plastic sheet under the dead man’s head so it won’t blow up any longer. Medical staff sits down again, this time squeezing closer together to catch more shade from the short palm.

A girl with handheld megaphone is broadcasting loudly, trying to gather her bus group.

The old ragged man and woman have settled under a shade tree and are now stomping to crush their plastic water bottles.

Pink nurses and white-coats break down their portable blood-pressure station. Loaded down with folded tables and boxes, they head straight for an opening in the park fence and have to detour around the dead runner’s feet.

A city trash collector wanders through picking up trash, poking his nailed stick into discarded brochures and candy wrappers near the dead marathon man. Kids play nearby on the park equipment.

I sit on the grass to keep watch.

An old man, dressed in running clothes, sits in the shade of a short palm near the dead man and leans against the trunk.  He takes off his shoes.

The crowd thins. Only a few people left.

Tee-shirt/ flag-sellers pack up their stand.

The old man under palm organizes his gear – pulls long pants onto his long bare legs.

The crowd has thinned out – a few people sit on the low, yellow railing across the path.

The old man under palm tree eats his lunch.

The dead marathon man becomes part of the landscape.

A young Chinese girl from the business college across the street spots me and comes over to practice her English.  I point to the dead man and tell her that he died just as he crossed the finish line.  Her face drops, eyes widen.  She says, “ooooh”, then bounces right back with a smile and says, “but running very healthy for you”, as she saws her bent arms back and forth in a running motion.

People ride by on rented, two and three-person resort bicycles.   The dead man lies 6 feet away as they peddle by on the sidewalk.  Many people walk or ride by and fail to notice but those who do, look as long as they can without coming to a stop.

I feel obliged to stay until someone comes for him.

A little police van shows up and four officers get out.  There is a police station 1-½ blocks from this spot, and the Marathon Man died two hours ago.  A few men sitting on curb across the path get up and talk to police – lots of talk.  No one looks over at the dead man.

I once saw a woman – shot dead, lying in a supermarket parking lot in Santa Fe, NM.  Her ex-boyfriend had been stalking her and shot her as she exited the grocery store with her daughter.

The police and ambulance arrived on the scene within minutes.  Yellow tape went up immediately, cordoning off a large area.  Police held up big white sheets as they recorded the crime scene, effectively keeping the operation out of sight.

A uniformed man takes photos of the dead man.  Another policemen fills out a form attached to his clipboard.

A small case of instruments appears and rubber gloves are donned.  Now a crowd begins to gather because something is happening.  The plastic sheet comes off.

A grandmother and little girl with a rope of hair poking straight out of her pony tail band, stand by the yellow metal fence, closely watching every move.  The little girl is asking questions – she looks up at her grandmother and points at the body.

The robin-egg blue sheet is removed. Someone had tied the dead man’s shoelaces together and placed his shoes between his feet.  The shoes have miles on them.   It looks as though he believed in exercise.  The forensic man cuts off the dead runner’s number, 862, along with his purple and yellow athletic shirt.

The Marathon Man’s skin is mottled – a lifeless pale color blotched with purple. Foam spills from his mouth.  One of the investigators grabs the man’s wrist and pulls the arm until the body flops over, stiffly.  Rigor mortis has set in.  His legs are rigid, his neck and head are fixed.  Now he lies stomach-down – his face smashed hard into the grass.  The rubber-gloved forensic man finger-pokes the purple blotches.  He conducts a gloved examination of the back of the skull.  The body is turned back over and now dark blood streams from the mouth.

Bystanders crowd in.  A few lean right up against the policeman who is writing the report, tip-toeing to look over his shoulder to read what he’s writing. A physical “comfort zone” between persons in China is nonexistent.

The police leave. It’s just me and the dead marathon man.  I’ve moved again and am sitting under the short palm quite near to him.  Just now, my unexamined and casually acquired first-world belief system dissolves.  I move closer anyway.

I am struck with the truth in the statement “you die alone”.  It’s Saturday, and the park is crowded with bicycles, pedestrians, buses and cars.  People cut through the park.  But the dead man is alone in his death.  I am remembering a story I heard recently about a man who died on the street not far from here.  Someone covered the body with a blanket, but it lay where it fell most of the day.   A friend told me that Chinese people are afraid of dead people and believe that the soul (Chi) takes a long time to find its way.  She said, “If you get too close it might come into you.”  My friend added, “Regulations and traditions in dealing with dead people in China are complex.  A dead body brings with it certain rights and responsibilities …both legal and cultural and the authorities wait as long as possible for family members to claim the body in order to prevent complications.”

In any case, the Marathon Man lies here.  Life continues on around him.  Life barely missed a beat.

I should leave but I can’t.

I don’t make eye contact with anyone, so eventually I become invisible.  I am watching people’s faces as they pass, I watch as it sinks in that it’s a dead man they’re looking at.  Every face records the same thing – a pause, a momentary emptying out of whatever they were thinking about.

The marathon event paraphernalia has all been hauled away.  Now the park is just a park again.  To people walking by, he’s no longer identified as a marathon man.  He’s an anonymous dead man, bare armed, bare footed, lying under a blue plastic sheet.

A white and purple van pulls up and backs as close as it can to the body.

The words, “ZHONG GUO MIN ZHENG”, are printed on side  (Upright the People of China).

A crowd gathers because, once again, something is happening.

A man approaches the body with long strips of a gauzy fabric and a black plastic sheet.  He lays the strips of cloth on the ground, unfolds the black sheet and places it on top of the cloth strips.

The three men use squares of brown paper to protect their hands as they lift the dead man and place him on the plastic sheet – one man on each arm and the third lifts both feet.  They fold the black sheet over and tie it tightly around him with the cloth strips.  They lower a red coffin-shaped box from the van, and place the marathon man into its white interior.

As two of the men slide the box into the van, the third comes along behind, rushing now, carrying the dead man’s shoes and red plastic bag.  He grabs a few scraps of paper that were lying next to the body, and places everything next to the coffin. They secure the doors and drive away.

The grass is just park grass again except where it’s stained with a small circle of blood.

My vigil ended, I tear up with unexpected emotion. I hope someone, besides me, is missing the marathon man right now.