2015 – Colette Hosmer
I once lived in an old villa on a small island in the South China Sea, home to turn-of-the-century art deco mansions (many of them abandoned), prized Banyan trees and a large colony of feral cats.  Right now, I’m thinking about those ‘homeless’ cats, and my soon to be homeless self. 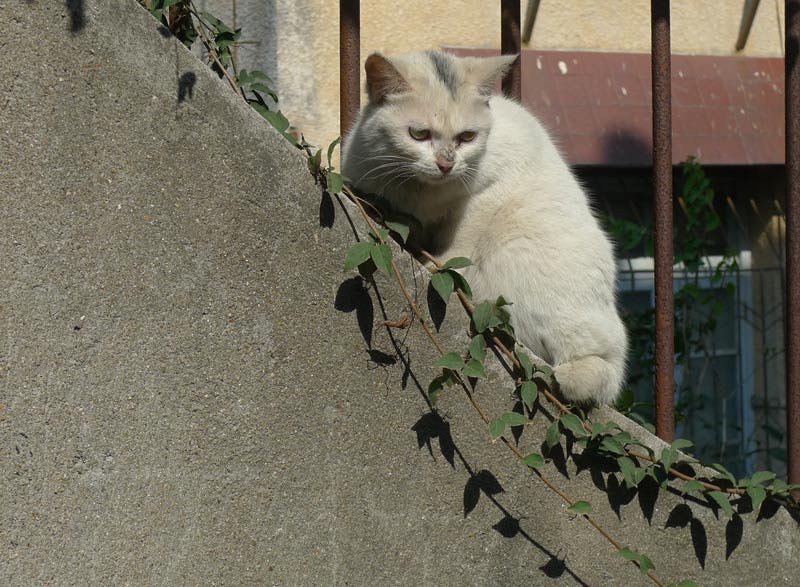 From my makeshift art studio behind the aging mansion, I could see a deserted building below me – its peaked, tiled roof indicated by a blanket of ivy that had plagiarized its form.  Sunlight seemed reluctant to enter through decaying window frames even though there was nothing to block its path.  An unsteady wall, bristling with broken glass, contained a small side yard where a scrawny cat appeared one morning with her single, newborn kitten.  They took up residence near the ruined building on a pile of wild plants and weathered trash. The abandoned house seemed to me a better home for the young white cat and her one offspring but this feral mother, guided by a sharp fear of confinement, forfeited a roof and walls for her nest out of doors.

As self-appointed feral cat guardian, I kept a lookout for stealthy tomcats prowling over rooftops and along walls.  I threw rocks at them when they came too close to the female and her kitten.  These attacks chased the toms away but the wild mother, unaware that the onslaught was for her benefit, disappeared as well.

In my world, homelessness implies failure.  Now I find I don’t have the means to keep my house or to replace it with another. This house has been home for 32 years and as I prepare to leave it, I am feeling as vulnerable as I imagined that cat to be.

I’ve lived in plenty of temporary dwellings; tents on the Serengeti, traditional Chinese homes, a World War II era East German office building, a rented room in San Francisco, another room overlooking a monumental sculpture worksite guarded by machinegun-toting Egyptian soldiers.  But no matter where I’ve lived or how long I stayed away, I have always had a house to come home to. These walls contain my art studio, my history, my sense of self, my validation, my trademark, my calling card.  Having long ago chosen an art career, a risky move at best, this house is how I show the world that I have my feet on the ground.

I envied that wild cat, unburdened by western ideas of self-determination and identity.  Independence is valued in my culture and now that I think about it, I’m not sure why.  Even feral cats live in colonies, and even these colonies align themselves with human settlements.  Months of traversing the small island on foot – where cars, and even bicycles were forbidden – showed me that its residents had a long tradition of feeding feral cats.  As soon as dinner leftovers appeared on chipped plates and dented tins, cats materialized out of the dark and sorted themselves according to feeding rank.

Following the disappearance of the mother cat and kitten, I remember lying in bed in the old villa at night, imagining myself safe behind warped doors and  breezy walls of mosquito netting.  I listened to the island’s feral cats snarl and hiss and imagined tomcats sweeping the area, seeking to find and kill a rival male’s progeny.  Perhaps they had already done so I thought, given the disappearance of the tiny kitten and its mother.  It also occurred to me that I shouldn’t have interfered with this cat’s destiny.  I was embarrassed for thinking that by hurling a rock at a tomcat, I could determine the fate of a cat and her kitten in that centuries-old feral colony.

A few months after the mother and baby cat disappeared I spotted a rangy white kitten alone on a lane that bordered the abandoned house.  The wandering kitten, vulnerable to roving dogs and interfering humans, risked drawing attention to itself with its loud wails of distress.  Fighting the urge to intervene, I stood back and watched.  A long time passed before its mother appeared from her new nest.   Still out-of-doors, but tucked under a roof of boards stacked carelessly against a wall, this den was less exposed to marauding tomcats and rock-throwing interlopers.  Perhaps the mother’s delay in coming to her kitten’s rescue was intended to toughen it to the challenge of feral living.  I remember thinking the kitten’s survival was tenuous at best.  But I also saw that the mother cat’s apparent vulnerability was deceiving.  She lived a more exposed existence but had been conditioned to adapt to life as it presents itself.

Now I spend long nights thinking about my own fate in the world. I am not yet accustomed to belonging everywhere or nowhere.  Do I believe that I can command my own destiny any more than I could that of the homeless cat and kitten?  If I can shake this need for self-reliance, will I realize a deeper sense of freedom?  It could be that I won’t feel the full scope of being alive until I shed these comfortable walls.