2006 – Colette Hosmer
I’m tired tonight, and a little lonesome. After being out most of the day (and lacking the energy to venture any further) I wander down the street to the tiny restaurant near my building for dinner. I hesitate slightly as I am greeted by the bold images of duck, octopus, dog and Santa Claus painted on the storefront window, but I intend (optimistically) to avoid any dish listing “dog” on the menu. 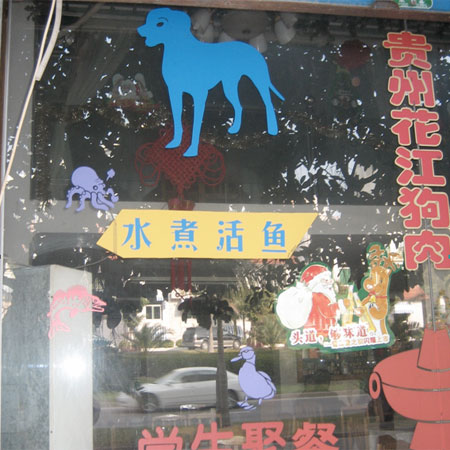 The menu is so dirty I am almost tempted to lose my appetite. But hunger wins out, so I give it a try. “Sauteed Large Intestine with Pickles.” Another time, perhaps. “Sauteed Sliced Pig Bag with Lard.” Not what I had in mind. “Spicy and Hot Bean Curd”. Yes. Also, “Fried Rice with Egg and Baby Shrimp” – the hamburger and fries of China. I don’t feel like being adventurous tonight. Add one big bottle of beer.

Tired, lonesome, cold and hungry – ingredients for introspection. I find myself writing in my notebook, “How I muddle through life with my introverted ways, I’ll never know”.

The tofu arrived – so far so good. Nice flavor, but the spicy bean curd is swimming in a thick, opaque oil. This massive mound of rice is good, too, but it could feed a small family. I continue to wonder why the majority of Chinese are so thin.

The family proprietors are hanging out in the restaurant – except for grandpa who relocated his plastic chair to the sidewalk. The little boy, maybe 5 years old, was just demonstrating how he could jump on and off the curb, a performance created especially for me. Now, on the chair next to me, he is singing to himself and writing his lessons, “t, t, t.” It looks like a “t” but is more likely a basic Chinese character.

I take consolation in knowing that there are accomplished, introverted people in the world. Maybe I should quit trying to pretend otherwise and accept my fate. I remember a story that I read years ago. Third graders were asked what they wanted to be in life. One little girl said, “I would like to be myself. I’ve tried to be other things but always failed.” Actually, having instant recall of this bit of Reader’s Digest self-help philosophy makes me feel even more pathetic.

I offered the boy a mint on my way out. Special mints, from a tin sporting the image of President Bush with accompanying print that reads, “NATIONAL EMBARRASS-MINTS”. The little boy shook his head “no” until his mother tried one and said “Hao”. He then took two and swallowed both at once.