2006 – Colette Hosmer
The morning was heavy, dark and waterlogged. I suggested we buy extra bottled water for the five-hour bus ride into the mountains.  “Not good,” Li Wen cautioned, “For instance, too much water and pee pee pee.”  My friend and translator would often begin a sentence with “for instance” and then repeat the last word three times for emphasis. I chose a window seat and Li Wen slid in beside me.  His five-and-a-half-foot frame, held erect by farm-worked muscles, spelled country even when draped in city clothes.  Li Wen was Hakka, an ethnic minority in China whose centuries old agrarian lifestyle is based on communal living.  His round face was framed by an abundance of black hair. Hair that acquiesced to a comb – unlike that of Han Chinese where each strand grew straight out of its follicle as if forbidden to touch its neighbors. 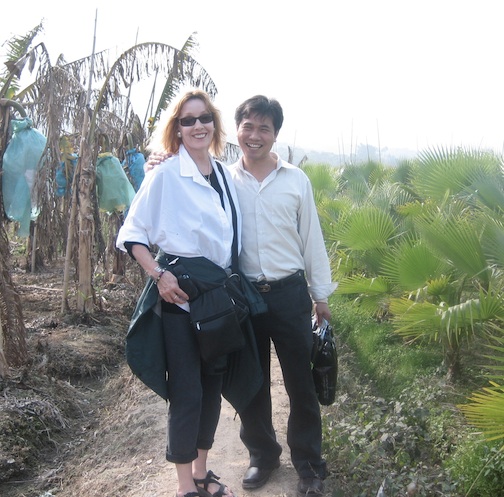 I liked Li Wen – Hakka farm boy turned city boy – and I’d come to love our long bus rides into the countryside.  I felt strangely at home suspended in the unadorned atmosphere where country Chinese lived their lives.  I was always the only foreigner on those country buses but, unlike city Chinese, no one stared at me openly, perhaps because we were packed so closely together.  Left alone to contemplate the aroma rising from piles of damp sunflower seed shells beneath my feet, I settled in to observe life inside and outside of the bus – a moving time capsule. I was happy and Li Wen knew it.  He shot me a powerful smile – one that shoved firm cheeks into the territory reserved for his eyes. His smile emitted energy – it pushed, and sometimes I felt rocked-back by the weight of it.

Our bus driver turned the key in the ignition and a Kung Fu movie began to blast from its video screen mounted high in the front of the bus-cues for Li Wen and several other passengers to fall asleep.  Our bus pulled away from the coastal city of Xiamen (where I was midway through a six-month art residency with the Chinese European Art Center). We began our ascent into the Dai Yun Mountains where fine porcelain clay had been mined since the 8th Century.  Li Wen was my connection to a porcelain master in the ancient settlement of Dehua, who would cast my wet-market inspired sculptures into porcelain; multiple goat tongues and heads, pig tails and teats and a composition of tangled eels.

Like other sleep-deprived Chinese, Li Wen seemed capable of achieving a deep sleep state within a minute or two of closing his eyes. The roll and pitch of his head threatened as it whipped and lurched like a loose cannon ball across the imaginary boundary between our seats. The constant element of danger created a building tension.  At the same time, I was spellbound by the engineering of the human neck – amazed that those few vertebrae, held together by ropes of soft tissue could survive the assault.

The young girl seated directly in front of me, slid her window open, thrust out her head, and vomited.  It didn’t come as a surprise.  Many bus rides ago, as I observed a small boy and his mother sharing a barf bag, Li Wen explained, “Every country bus someone ‘spits’.”  He told me that he was 18 years old before he rode in an enclosed vehicle.  He traveled several hours by bus to take a school test and was very sick.  He shook his head woefully, “I spit many times”. Li Wen no longer suffered from motion sickness in a moving vehicle, but his old and new cultures refused to blend easily. With one foot in the country and one in the city, Li Wen struggled to find his footing.

Along with 900 million other rural Chinese, Li Wen was stumbling headlong into the cultural territory of the 21st century.  He wore a cheap knock-off belt buckle meant to resemble the trademark belt of a Chinese businessman and he carried a briefcase of sorts – a Nike Logo imprinted plastic bag which contained his Chinese / English dictionary.  Li Wen was thirty-three years old, the last of seven children to leave home. Two older brothers got away to school and four sisters married and lived elsewhere in the countryside.  Li Wen left home for the city three years before I met him.  He couldn’t speak a word of English then, but possessed a fierce will to improve his lot in life and that of his family – old parents, a wife and two young children back in his home village.  Li Wen’s marriage to an older, local girl was arranged. I asked if he loved her.  He said they didn’t think about things like that, “We just say OK.”

Lack of visibility corralled my range of vision and the countryside moved close in. Terraced hillsides and fan-like, Feng Shui graves softened and melted through water-rippled window glass.  A roadside flock of ducks huddled together against the rain.  Li Wen, now awake, saw them too, and told me that he was the family ‘duck-herder’ until he moved to the city.  His father had to sell their flock of two hundred ducks when his son left home because there was no one left to assume the responsibility.  Li Wen talked of his duck expertise with enthusiasm and I was a willing audience.  He told me about “rice-duck” farming, an ancient method that utilized ducks in rice paddies for weed and insect control.  The ducks stirred up nutrients with their feet and bills and added fertilizer as they went.  When the harvest was in, the ducks gleaned fallen rice from the now dried paddies and provided meat and eggs, as well as medicinal duck-soup remedies for an endless list of human ailments.  Li Wen elaborated, “For instance, people in city don’t know these things.  When woman give birth she need much duck.  Supplies her body.  Makes much milk.”  Li Wen said he knew “many medicines” and detailed the proper way to perform a duck castration.  From Li Wen’s glowing description, “Many ducks look beautiful when walk through thin place”, I could easily visualize the large flock as it shape-shifted to funnel through a narrow spot.

Li Wen spoke to me about his childhood on previous bus rides.  “Never enough rice”, he told me, “No money for clothes, so mend, mend, mend.”  Life improved following China’s ‘Reform and Opening’ policy in 1978.  “Family can work hard and keep own money, so we become more rich.” He added, “Plenty food and no worries. Then house burn and we become poor again.” He related this story without emotion as if to say, life was hard then and now it’s better.  Li Wen wasted little time or energy in the past – mulling over what he had or didn’t have, what his parents did or didn’t do.  In fact, now that he lived in the city and could send money home, he proudly reported, “Father is happy. Plenty rice to make wine”, and then he added matter-of-factly, “Father is alcoholic”.

Our driver blasted his horn as he tore through the petroleum-stained outposts that crowded the roads edge.  Motorcycle repair shops and one-wok restaurants competed for space with scruffy vegetable patches.  Although the sky was dark and overcast, it was officially daytime so there were no electric lights burning in the small shops.  Cramped charcoal mills were completely black-earth, building, workers, all coal-dust black – little ‘Black Holes’ that sucked-up light. Scattered trash implied that this blend of old and new cultures had yet to get the hang of garbage that wouldn’t dissolve back into the earth on its own.

A few farmers, shrouded in plastic, methodically followed their hoes in the otherwise deserted landscape.  A man and water buffalo leaned forward as they sliced through the muddy earth.  The tumbling, roadside stream flooded its banks periodically and spread earth-dyed water over fields and vegetable plots. Straw-walled mushroom shacks swelled with delight on this dark, damp day.

Halfway to our destination, the old bus lurched off the road and stopped. I ran through the rain to the public village toilet and was soaked clear through.  The concrete stall dividers reached only to my waist and did little to prevent curious country women from observing my every move. An open trench traveled under each short wall before it exited the building.  Presumably, water flooded this gutter occasionally and carried the waste away.  A flush was long overdue.  China was up in-your-face.  She didn’t pretend that shit didn’t exist or garbage or pain or death. She didn’t disguise the process by which animals become food.  Maybe that’s why I loved her. China spoke the unvarnished truth. Lovely, brutal truth.

As I reclaimed my seat, Li wen, who had presumably held onto the recent image of the man and buffalo in the field, said, “My cousin has “water cow”, “I have normal cow, also woman pig.”   I waited for the rest of the story.  “I take woman pig to man pig, just short time for sex. Maybe one hour.  Cost 50 yuan.  Pig soon have many children.”  The bus staggered back onto the road as the Kung Fu movie soundtrack revved-up to normal speed.   “I sell children when three months old.  “Mother pig miss children. Makes much noise.”

Cold and damp after my sprint in the rain, I felt a renewed empathy for the motion-sick girl who thrust her soggy head out of her window to “spit” again and again.  I watched the contents of her stomach change as it streaked past on my window.

We sped by ancient, traditional compounds – beautiful stone buildings with sloped, tiled roofs pitched-up at the corners to hurl off evil spirits. These closely packed, communal dwellings sat lower in the earth than the newer, ever-advancing brick buildings and on that rain-soaked day, they appeared to be sinking out of sight.  “I could live in a place like that”, I whispered aloud to myself.  “Only very poor people live there”, Li Wen offered, barely turning his head to look. “If they have money, they live in apartment building.”  He added, “Only old man and old woman live there. Young people want to open eyes in city.”

Rain pooled on the inside of my window ledge reviving thoughts of earlier vomit.

We careened into the Porcelain Town Bus Station ahead of schedule.  Li Wen offered an explanation for our early arrival, “For instance, on rain day not so many people get off, get on, get off.”