1992 – Colette Hosmer
We turn off the beaten track — way off — and continue for another couple of hours through lung-choking volcanic dust as fine as flour.  Worn out and thirsty, we finally arrive at our campsite near a welcome grove of trees in the rift.  We are deep inside the Engaruka Basin, surrounded by cliffs and volcanic mountains.  This is not a Tanzanian game park but a wild, natural environment where traditional Maasai live as they have for millennia. 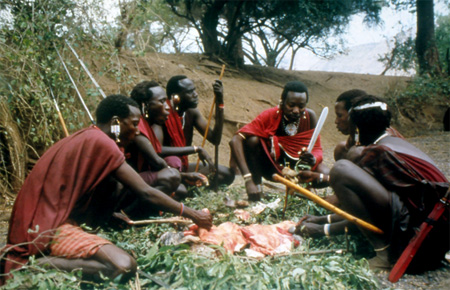 A swarm of bees joined me for my shower.  There have been three exceptionally dry years in this area and the bees were happy to have miraculously found water where none existed before.  The dark, mobile mass blanketed my wet body, but slow, careful movements on my part resulted in only one sting.  Soon, a pull of the overhead chain produced only a trickle.  The metal drum containing the tepid shower water was half filled with drowned bees.

The next morning our host, Peter Jones, rifle slung over one shoulder, led us overland to a Maasai village that had been abandoned several months before.  It was exhilarating to be on foot and see the occasional giraffe gallop by.  A herd of Zebra was also content to remain quite near our small but intrusive party of five.  Maasai do not hunt these animals so they have not been fear-conditioned. Maasai are nomadic people and move their encampment every two years or so.  This is an environmentally sound move, as the natural habitat has the opportunity to revive between settlements. I foraged about in the deserted huts and found a carved, wooden ear-hole stretcher and a small staff used by a cow/goat herder child.

We continued on to an occupied Maasai village.  I succeeded in scaring the hell out of one 3-4 year old boy.  I took a couple of steps toward him and smiled — he jumped and ran screaming back into the village.  He inched out later to take another peek but caught me looking at him and he turned, screamed and shot back in again.

The women were inviting, friendly and curious about us.  They wear all of their beads every day and are quite beautiful with their shaved heads. Every Maasai adult has an empty space in the center of his/her lower jaw where a tooth has been purposely knocked out.  The story goes that liquids will still be able to be taken if one has the misfortune to be stricken with lockjaw.  Each married woman builds her hut from an infrastructure of cut poles, weaves a lattice into the framework, then mixes cow manure with water to plaster the outside. The roof is thatched.  The interior is casually divided into separate areas — sleeping platforms are made of poles and covered with cowhide.  There is a hearth in the center but no vent for the smoke to escape.  One of the huts had a mother goat and her newborn tied inside.  An elder often supports several wives and chooses which wife will accommodate him on any given night.

Maasai cattle spend each night, safe from marauding lions, inside a high thorn bush enclosure that surrounds the village. Their manure is collected each morning for use in construction and for fuel.  There are interior, smaller bush corrals for the goats.

Knowing that the Maasai have their own method of butchering and  have probably been using the same method for centuries, I asked Peter if we could witness a goat feast.  Peter bargained with an elder for the goat and it was arranged that it would be delivered the next morning.

There are many Maasai in camp this morning as the word of a feast spreads – and they keep on coming.  Soon enough the elder came leading the goat on a rawhide leash. Several warriors were present – maybe a dozen or more, but two or three played an active role in the butchering.

A site was chosen for the ritual.  Green-leafed branches were spread on the dry riverbed to form a “mat”.  A commanding warrior named Laymatango took the lead.  He was confidently adorned with beautifully beaded accessories (produced by talented girlfriends) and showed a natural authority as he tossed orders at the others.  He laid the goat on the fresh boughs, pressed his knee against the ribcage to prevent inhalation, and clamped his left hand over the goat’s nose and mouth until it suffocated to death.  It seemed to take about 4-5 minutes.  The goat jerked every several seconds but it was no more traumatic than that.  I found myself thinking, “What a sensible and gentle way to kill.”

When the goat was dead, Laymatango stuck the tip of his knife (each warrior carries one in a sheath on his belt and they are razor sharp) into the breastbone and pounded it in — three whacks.  This started the flow of blood into the chest cavity.  With Laymatango in charge, three or four Maasai began to skin the animal.  When they reached the knee joint, it was cut, broken and carried to the fire for roasting.

Shortly after the skinning began the warriors started to comment on the good quality of the goat – fat and healthy.  Ray had made his way to the testicles and began skinning around them.  Others were already chewing on the roasted legs and noisily sucking out the marrow.  I noticed an involuntary twitching of the goat’s shoulder muscle.

Meat and fat covering the ribcage was left attached to the bones.  The abdomen was opened – a layer of internal fat was cleared away and saved for a special future soup.  Then the liver was removed, speared with a stick and sent to the fire.  The gut and stomach were carefully cut free.  The kidneys were detached, portioned out and eaten raw. The goat was now entirely skinned and there was a notable absence of spilled blood.   One shoulder was removed and then the chest cavity was opened.  It had served as a vessel for the blood – it appeared that a couple of quarts had bled into the cavity.  Four Maasai, beginning with Laymatango, lowered their heads in turn into the cavity and slurped up blood.  One warrior said, ”Hey, you’ve got more than your share!” the other warriors laugh.  Peter translates, we laugh too. The heart is cut so that it will bleed out.

One Maasai has been methodically stripping the gut.  Another shoulder comes off.  One stomach is removed of its contents and sent to the fire.  Each rack of ribs is removed.  The warrior cleaning the stomach is scraping the stuff off of his fingers with his knife — all the while there is joking and laughing.  Peter says, ”Happy as Maasai men eating goat.”

I notice that a few of the men have one-inch diameter plastic bottles through their ear lobe holes (these contain snuff).  The testicles are cut off and sent to the fire.  The hind-quarters are halved and removed.  The liver returns “cooked” and one cuts and distributes while everyone eats.  The center of each piece is distinctly cold and red.  A small stomach is sent off to cook.  Meat is carved from the neck and then the neck is cut from the head.  The eyes are removed.  Peter says they are a delicacy and offers one to my sister, Nancy.  She refuses.  The horns are hacked off – a stick is rammed up the nose and the head travels to the fire.   The goat was smothered at approximately 11:00 a.m., it is now a little after 12:00.  One man is scraping the charred hair off of the goat’s head – it goes back into the fire – more scraping.  He begins to cut the meat off the face and eats it.

The men are very interested in my note taking.  At one point I drew a diagram of a slab of meat – speared with sticks for roasting:  they all recognized the drawing and nodded positively while continuing to examine my scribbling.  I indicated that I was recording the entire event and they again nodded approval.  The mandible was pulled from the skull – it was split open and laid directly on the coals.  I left the scene while one Maasai was still chewing on the skull.  Everyone was happy, giddy and drunk-like.  I am overwhelmed.  What an incredible, powerful experience this was.  I retire to the tent to transcribe my notes.

The Maasai women stayed in camp during the feast.  They are not permitted to witness butchering and cannot see or attend a men’s feast.  In fact warriors do not eat in front of women.

After several hours, Peter said it was time for everyone to go.  People slowly began to wander off.  Some women collected firewood to carry miles back to their villages.  I am in the tent an hour later and can still hear an occasional Maasai voice coming and going.

The Maasai possess a unique odor and I’ve come to like it. The intoxicating fragrance is composed of a blend of acacia smoke, sweat, cow fat, leather, sour milk and sweet grass that is rolled into cords and worn around the neck.

We invited Maasai warriors and elders from various villages to return in the evening to complete the feast.  The men put the remaining quarters and racks of ribs on sticks which were sunk into the ground and slanted forward to surround the fire.  Our camp cook sent out some accompanying dishes and a special barbeque sauce that he created for the occasion.

The goat was delicious.  Maasai rolled chunks of meat in shallow bowls of salt.  They ate with gusto…smacked their lips, sucked marrow from limb bones.  Some bit into chunks of meat  – and pulled back as they sliced each piece from the bone.  It was a first-rate party, filled with shouts and laughter.  We all took part in competitive bouts of strength, such as:  holding the very tip of a spear and raising it with a straight arm…not easy.  Laymatango made it look easy, Mike and Dan managed with much less ease — Nance and I were offered and accepted a 10” handicap.

I hated to see it end and was sad to see everyone go. It was way past dark and Peter arranged for some of the farthest ranging Maasai to be driven home in the camp truck.  This was a most extraordinary day. Peter said the Maasai had the time of their lives.  So did I.